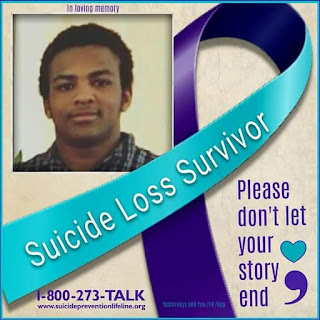 Post traumatic stress disorder or PTSD is a psychiatric disorder that can occur in people who have experienced or witnessed a traumatic event. For the full diagnostic criteria please click here.
Basically when a person has been through trauma, certain events (called triggers) can cause a person to have anxiety, anxiety attacks, or fear. They may avoid situations that may trigger memories, people with PTSD may have nightmares related to the event. It can cause depression, irritability, detachment from others, problems sleeping and problems concentrating..
PTSD is not always an exact replay of the actual event, it's sometimes a replay of the emotions you felt during the event such as fear, helplessness and sadness (Alice Cariv)

I have had PTSD in the past concerning a bad car accident and a violent relationship with my children's father but nothing as bad as Zuka's suicide. When I was in the hospital I was diagnosed with PTSD, I was not surprised, I don't think you can go through something like this and not have PTSD. I had nightmares every night until I went to the hospital and they gave me a medication to help with nightmares. A couple of incidents have happened that caused pretty major anxiety attacks.

The first one happened the first time we went out after Zuka's death, We went with very understanding friends for support. It was really hard going out in public and never knowing what make you break down crying. We had a nice dinner and everyone was heading out but I decided to run to the bathroom real quick. On the way out the heavy wooden door banged behind me....Immediately I threw my hands up in front of my face, I was so afraid and felt like I was in shock, I started crying and ran out of there. PTSD can be embarrassing, all the way home I wondered what people who witnessed that anxiety attack must have been thinking.

The next incident occurred when I was at a get together and a guest (who had no idea what happened) brought in his new shot gun to show everyone, I was nervous but when he racked it, I did the same thing, threw my hands up, I was so scared, I started getting out of my chair to run out but my friend jumped up and yelled at them to take the gun out. I think they thought I was afraid of guns, I tried to explain and I was stuttering. It was a very traumatic experience for me, though no one is at fault!

I have had several other incidents, watching movies, loud noises, I just never know what will bring on flashbacks or anxiety attacks. The bad dreams haven't been about the exact incident but they are about fear and loss.

If you have been through or witnessed a traumatic event that causes reoccurring bad dreams, fear, anxiety, avoidance of situation you may find fear inducing you may have PTSD


Here are some things that may help

Do you have questions, comments or anything you want to share, you can leave a comment below or email me at zukaslegacy@gmail.com