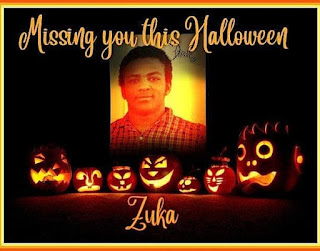 Yesterday was Halloween. Last year we got no Trick or Treaters but on the way home from y counseling appointment I decided that I wanted to participate in Halloween. Turns out my husband and daughter both had to work. I played music out the window and left my door open, yet I kept seeing them walk by.

I decided to take Zuka's speaker outside, I blasted Halloween music! I put the big bowl of Halloween candy bags outside in the lawn chair beside mine and waited. I ended up getting quite a few kiddos, about half of them were teens. I was so happy to see the teens, they were all so polite, several complimented me on my music and talked to me for a little bit. There was a couple who let the younger looking teens come over for candy and I told them to come get some candy.... several times I told different teens "No one is too old to get candy here!"

I thought about my son who was 18 and would tell me, "Mom, I'm not an adult, I still need parenting and advice." He hated when I called him an adult. It was like suddenly he was 18 and the world expected him to be a grown man but he wasn't, he still wanted to do the same things he did when he was younger, I really saw the way the pressure of "18" affected him.

When I saw those teens, saw them laughing and having fun, I thought it was wonderful that in some way they were clinging to their childhoods. Not ready to be expected not to like "childish" things anymore, not ready to be considered adults. I was so happy to see them, I wished them all Happy Halloween as soon as they started up my driveway..... just so very happy to see them... and each one of them seemed so thankful and just really cool!

When it was over, I came in and cried a bit, missing my son and appreciative of the night I had, where I somehow felt close to him by spending the brief time with these teens. It's funny, I never wanted to work with teens before, but now I am thinking of working with teens when I finish my degree, maybe working on a psych unit with teens....
on November 01, 2018