Messages from friends and loved ones 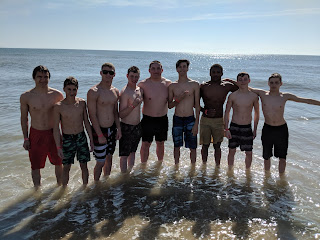 This was down at Virginia Beach back in May. We rented a big beach house and we had a heated in ground pool. All the boys went swimming and then wanted to walk across the street to the beach. Zuka was only wearing underwear and I asked him if he was gonna throw some shorts on. He replied no lol. He did throw on some shorts. He was a great person to be part of the team and a great person to have around. He had a personality that took center stage. My son Jake really got close to him. On Saturday I texted my son to tell him I was going to the memorial and that night he called me (he is away at prep school) and he was crying his eyes out. The reality hit him. He misses Zuka big time. These are things I thought I should share with u. He was a beautiful person. 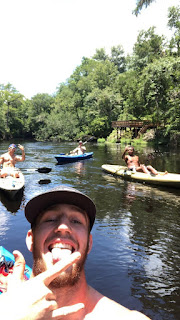 This was the 4th of July Kayaking trip that Zuka, Nick, Tyler, and I encountered together. We took a “4 mile” trip which was actually 10 miles. We paddled and paddled to get the the meeting “hot-spot” of the Ichetucknee river and santa fe, after about 8 miles of non stop paddling(because the destination was "right around every corner"... or so we thought) we finally arrived. After 5 minutes of catching our breath and finding a spot to get out the rain started to we paddled the remaining 2 miles against many, many, many boat wakes. We finally made it back to the river cabin where we all laughed and then jumped off the dock into the waves made by the passing boats.
This is one of the great memories I have with Zuka... that was just such a great trip. When I picked him up to take him to the river cabin that was “15 minutes” away from Brendens house(30 minutes from yours), we actually found out the ride was double what we were told. Oh well, I didn't care. We were going to have a great weekend anyways.
Unfortunately Zuka and I went through numerous cell dead zones and the song “I took a pill in Ibiza played for about what seemed like 45 minutes of out hour long ride.... another thing we laughed about all weekend, especially when that song came on again in a deadzone on the river (we opted to just turn the music off lol). 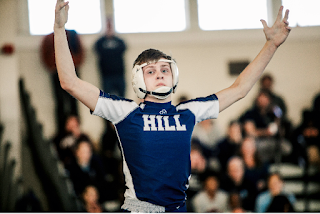 "Jennifer, I wanted to pass this along to you. My son Jake Craig attends a private school in Pennsylvania. He was recruited for wrestling. He really liked Zuka and the two grew close during the season that he wrestled in Maine for Skowhegan and the summer wrestling trip to Virginia Beach. Jake took Zuka's death extremely hard.


So this season he dedicated his wrestling to Zuka and his memory. I'm proud to tell you that today Jake won Pennsylvania Prep States! If you look closely at his headgear you can make out a "ZM" in honor of Zuka. He told me to tell you that this one is for Zuka. He meant a lot to my son. Thought you should know."

I'm sorry about Zuka he was one of my best friends. I hope you and your family are ok.

He was such a nice kid and amazing athlete, so fun to watch on the mat. As a mom I am heartbroken for you, please know that Zuka's OHills family is grieving with and thinking of you. Praying for strength and love.

Zuka and I didn't know each other very well but he was a role model to everyone. A lot of us looked up to him. You have my prayers

i made a post about Zuka. He was a really good kid. You are very lucky to have someone like him to call a son

Zuka was a great kid and he brightened many peoples lives. He will be missed by many and never forgotten. I wasn't close with Zuka but I saw him most days and I know he was a great person.

I loved Zuka and even though him and I weren’t close, i hold him very close to my heart. I am so sorry for your loss as well as mine.

He made sure I didn't feel beside myself & my heart is truly heavy to hear the news. A heart & soul like his is rare to come by. I just wanted to tell you I will always smile when I think of him & how great of a person he is & how the world would be a better place if more people had even half the love & kindness in their hearts that he did......
But when I met him, I was almost losing the battle. He said that he never would have imagined I felt how I did in school because I was always laughing & I told him I thought the same about him. He always tried to make everyone laugh, he tried to make something good out of everything. He was so full of light. I truly wish I would have stayed in touch with him after I moved.

I just wanted to say thank you for sharing your beautiful boy Zuka with us. Every time Zuka has been at my house and I saw his beautiful smile I knew how wonderful the Momma is that this boy belongs to ; )

Mr. R use to say that i was gonna marry zuka when he went to school in live oak i was like naaaaah but in my head like yaaaasss because zuka was cute to me but i didn’t tell him that though. i also remember when i broke his wooden bat at those apartments you guys use to stay at

Still can't wrap my mind around it, had many great times with him, very sad that he's gone, but never will be forgotten, very soon I'll have a tattoo in memory of him and another classmate that passed this year. Forever love zuka

Thank you for this message. Zuka and I had a very special relationship. Ups and downs but always love and respect. I recently told (my wife) that because of my time with Zuka my life has been made richer, fuller and more meaningful.

I thought you might get a quick laugh. I was missing a pair of sunglasses that seemed to disappear. At the celebration, my daughter pointed out that zuka was wearing them in the picture on the poster board. I couldn't help but chuckle a little bit. I knew I had left them in our suburban. I must have searched that vehicle a hundred times. He really was a great young man!!!! I just couldn't help but laugh. He always had a way to make you smile. He surely will be missed by many. I hope you at least got a few of the stories involving him. I heard a lot of great ones.

From L.B.
Love the pics of his cigar box items...makes me laugh though, because he ate (my sons) social security card one day! LOL

he used to eat things all the time! LOL I yelled at him when he ate the dollar bill...I said money is the grossest thing in the world...DONT EAT IT!!! LOL
I told him i would share my Swedish fish with him if he promised never to eat money again!!! LOL


Hi, I know you don’t know me but I know Zuka. We were on the wrestling team together, he was one of my first friends at Oxford Hills. I was appreciate you posting his manifest on Facebook, it felt like I was sitting next to him in English reading aloud. Zuka’s humor was something that helped me get through high school laughing.

Zuka was an amazing person that touched so many lives in such an impacting way. His legacy will live on through so many people, their memories, stories and photos. He will never be forgotten and that's an amazing thing.